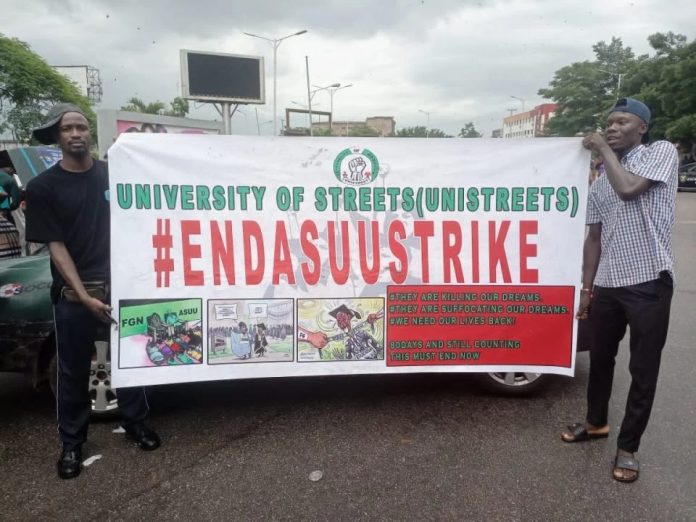 President of the Academic Staff Union of Universities (ASUU), Prof Emmanuel Osodeke has disclosed an extension of the ongoing strike by another four weeks.

He made this statement on Monday, August 1, and said the extension, which takes immediate effect on August 1, was to give the government enough time to resolve all outstanding issues with the lecturers.

The statement reads: “Following extensive deliberations and taking cognisance of Government’s past failures to abide by its own timelines in addressing issues raised in the 2020 FGN/ASUU Memorandum of Action (MOA), NEC resolved that the strike be rolled over for four weeks to give Government more time to satisfactorily resolve all the outstanding issues. The roll-over strike action is with effect from 12.01 am on Monday, 1st August 2022.

“An emergency meeting of the National Executive Council of the Academic Staff Union of Universities (ASUU) held at the Comrade Festus Iyayi National Secretariat, University of Abuja, Abuja, on Sunday, 31st July 2022. The meeting was called to review developments since NEC’s resolution to extend its roll-over strike action by another 12 weeks with effect from May 2022.

“The NEC meeting took place against the backdrop of government’s obligations as spelled out in the Memorandum of Action (MOA) it signed with ASUU on 23rd December 2020. Specifically, NEC recalled the government’s failure to conclude the process of renegotiating the 2009 FGN/ASUU Agreement, deploy the University Transparency and Accountability Solution (UTAS), pay outstanding arrears of Earned Academic Allowances (EAA), release the agreed to sum of money for the revitalization of public universities (Federal and States), address proliferation and governance issues in State Universities, settle promotion arrears, release withheld salaries of academics, and pay outstanding third-party deductions led to the initial declaration of the roll-over strike on 14th February 2022.

“NEC viewed with seriousness the recent directive given by the President and Visitor to all Federal Universities that the Minister of Education, in consultation with other government officials, should resolve the lingering crisis and report to him within two weeks. The Union wonders why it had taken five full months and needless muscle-flexing for government to come to the realisation of the need for honest engagement.

“NEC acknowledged the growing understanding of the issues and the groundswell of support for the Union’s principled demand for globally competitive university education in Nigeria. Nigerian universities must not be reduced to constituency projects that merely exist on paper and our scholars must be incentivised to stay back and do what they know best, here in Nigeria.

“NEC appreciated the historic nationwide protest of 26th and 27th July 2022 organised by the Nigeria Labour Congress (NLC) in collaboration with Civil Society Organisations (CSO) to further create awareness on the antics of the Nigerian ruling class to destroy public education. ASUU renews its commitment to the struggles of NLC in championing the cause of the working and suffering Nigerians.

“NEC observed that non-signing of the draft renegotiated 2009 FGN-ASUU Agreement more than one month after it was concluded by Professor Nimi Briggs-led Committee is further tasking the patience of ASUU members nationwide.

“NEC further observed that the ongoing trial of the suspended Accountant-General of the Federation (AGF), Mr Ahmed Idris, on allegation of monumental fraud has vindicated ASUU’s rejection of the Integrated Payroll and Personnel Information (IPPIS). The National Information Technology Development Agency (NITDA) is enjoined to release reports of the latest tests on the University Transparency and Accountability Solution (UTAS) vis-a-vis IPPIS without further delay. ASUU shall resist any attempt to truncate the deployment of UTAS with all legitimate means available to the Union.

“NEC noted that cumulative indifference by the political class gave vent to a pervasive atmosphere of insecurity which now threatens the seamless provision of educational services in the country. The unceremonious closure of educational institutions in the Federal Capital Territory (FCT), following the recent attack on Presidential Guards, betrays a panicky measure to addressing a malignant ailment. Nothing short of a comprehensive overhaul of the security architecture of the country will sustainably address the problem.”