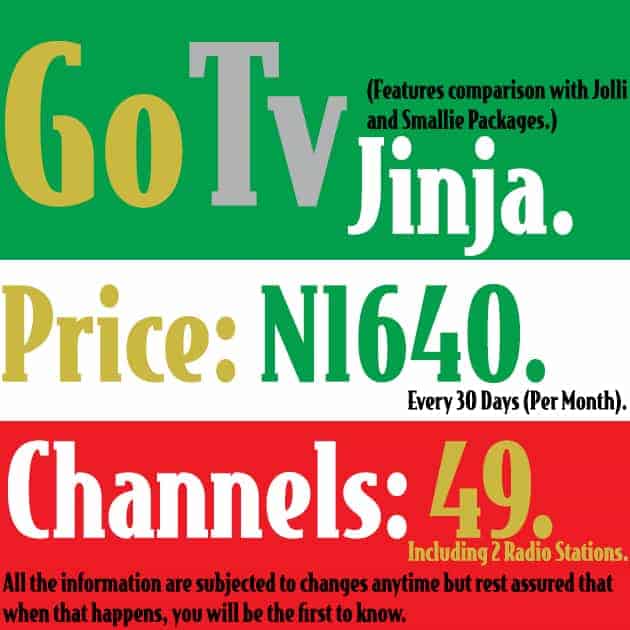 Do you know the stations available in the GOtv Jinja channels list?

You might want to check out this post if you don’t have much time to spend in front of the tv or have little amount budgeted for a pay-tv subscription.

So, how about we talk about its list of channels and price in Nigeria?

It is the second cheapest plan on GOtv you can subscribe to right now.

Since most of Nigeria’s population is in the lower middle class, it makes sense why GoTv is the most used satellite Tv in the country.

I mean the majority of Nigerians can’t seem to afford DStv subscriptions and StarTimes doesn’t seem to be gaining much traction these days.

So when the company came up with packages like Jinja that people can get for a small amount of money, they rushed it.

Below is the list of channels on GOtv Jinja:

Is Channel 29 on GOtv Jinja Bouquet?

Sorry, you can’t watch BBNaija on this package, upgrade to Jolli or Max so you can access channel 29 which is airing the reality Tv.

Jinja’s subscription cost 1,900 Naira per month and it gives you access to 49 channels which include 2 audio stations.

There are over 45 channels on Jinja that you don’t want to miss and in this post, you’ll find the lists of even the most current ones.

But remember that smallie is 1,000 Naira cheaper than Jinja. So the question is, can you let go of the above channels because of that amount?

If you are trying to decide between Jolli and Jinja, then you should check my write-up about Jolli plan and channels. I have already compared them in it.

Launch of the GOtv Jinja Package

It was on December, 10th 2019, that Multichoice Africa announced that they will be adding two new plans to their GOtv packages one of which is Jinja increasing the total number of available bouquets to 6.

Not long after that, the decision immediately led to confusion among their customers because the new bouquets overlap both in how much they cost and the quality of channels available on them with some of the old packages.

It became so hard for people to select which one to subscribe to between them without comparing all the channels available and then looking at the price and it was so frustrating for most people.

They later decided to alleviate the removal of both plus and value packages in the middle of 2020 around June.

Plus Vs Jinja Vs Value

Plus and Value plans have now been deprecated. I left this part because we might need to point to it later.

Numerous subscribers are confused right now with the introduction of Jinja which is placed in between the existing Plus and Value bouquets.

They don’t know if it’s worth it to downgrade from Plus to Jinja or Upgrade from Value to Jinja.

Here is the deal.

I will give you all the facts and you will make the decision yourself. Deal? Great.

Let’s start with the fact that the Plus package cost 1900 Naira per month which means it is just N300 more expensive than Jinja.

But is it worth it? Let’s find that out together.

There are 6 channels Plus subscribers are enjoying that Jinja subscribers aren’t right now and they are SuperSport Select 2 and 3, BBC World News, Hip Tv, MTV Base and RSTV.

And there is just 1 station that Jinja subscribers can watch that Plus doesn’t have access to and it is Wazobia Tv.

If you ask me, I think I will stick to Plus if it were me. The 300 Naira is more than the channels I will be missing if I decided to go for Jinja.

But that’s just me, you will have to decide for yourself.

Now you are asking yourself if it is worth it to upgrade to Jinja from Value package.

Well, my own answer is No but you have to decide if it is for you.

Meaning I will be paying 350 Naira more just to listen to Naija Fm? I don’t think so.

If you still want to move from upper or lower bouquet to Jinja I had previously published a post that explains how to upgrade and downgrade from one GOtv package to another. So be sure to check it out.

(UPDATED): Please note that Value and Plus packages have been discontinued by GOtv.

So, what do you think of the GOtv Jinja package? Do you think, that it is a much better GOtv package than smallie?

Well, you have all the facts and figures and data and details. The decision is yours now.

You can subscribe to this package using quickteller.com/gotv then enter your details to complete the transactions.

Finally, if you find this article helpful, kindly share it with your friends and family and relatives across all social media platforms.

This article was most recently revised and updated on 4 weeks