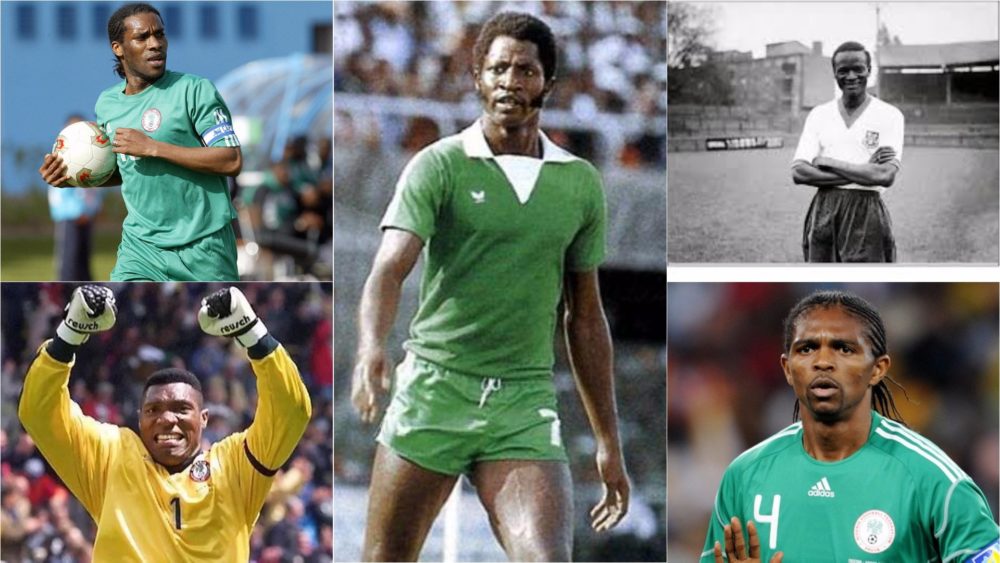 When talking about the all-time best team for a nation, the first thing to consider is the exploits of the selected players for the national team and not the clubs they all played for.

Given it’s possible to have players thrive at the club level but find it hard to replicate their club forms when they’re on a national assignment.

For Nigeria, the preponderance of opinions is to pick the country’s all-time best eleven from the ‘golden generation’ set which was between 1993 to the late 90s.

Rightly so, the team was unplayable for most of the years in the 90s; and to further announce the team’s greatness, the ‘golden generation’ rose to Nigeria’s highest level on the FIFA ranking (5th) prior to the 1994 FIFA World Cup in the United States of America.

In addition, their heroics as the ‘Dream Team’ at the Atlanta 1996 Olympics where they clinched the gold medal in the football category against all odds.

Since then, several generations of Nigerian footballers have had successful stints in the Super Eagles while a lot have enjoyed legendary status both domestically and internationally; but what is the all-time best Nigerian best eleven like?

Find out in this article as NaijNaira reel them out.

It was quite difficult to pick between Enyeama and the legendary Peter Rufai as the pair were the longest-serving Super Eagles goaltenders. But what stood out for Enyeama was his longevity and brilliant record with the three-time African champions.

He might not be one of the ‘golden generation’ set but there is hardly any doubt regarding his abilities between the sticks. Enyeama, 40, kept 29 clean sheets in 101 appearances for the Eagles of which 84 were in competitive fixtures.

Enyeama featured for Nigeria in eight international tournaments (3 FIFA World Cups and 5 AFCON) before his retirement from international football in 2015 after a fallout with the then Eagles’ boss, Sunday Oliseh.

Joseph Yobo was also not a part of the ‘golden generation’ set but he had a successful time in the national team as a follower and a leader.

The former Everton defender started as a right-back but also thrived as a centre-back thanks to his versatility and reliability.

While being famous for his incredible pace and physicality, Yobo led the Super Eagles’ backline for years before retiring. Since he made his Super Eagles’ debut in 2001, Yobo featured for Nigeria in 97 matches which include ten World cup matches.

This is incontestable. Taribo is the first player on our list from the ‘golden generation’ set. West was a fearless, and rugged defender who never took his eyes off his opponents.

Now a Pastor, Taribo West was versatile enough to play both as a centre-back and as a full-back and he played an integral part in the Super Eagles’ unforgettable run to the Olympics glory in 1996.

He was part of the Europa League-winning Inter Milan team of the 1997/98 season before leaving the Nerazzurri to join AC Milan in 2000.

Okechukwu was a mainstay in the Eagles’ defence of the 1994 set that qualified for Nigeria’s first-ever World Cup. The former Fernabahce star was resilient, rugged and ruthless in the defence as he took every match like a competition.

Uche was fearless as a defender, and it was why he could cement his place permanently in the national team.

He won the 1994 AFCON with the Eagles and was instrumental to Nigeria’s quest for qualification for the World cup.

Here’s another integral part of the ‘golden generation’ but Keshi had made his name right before the era of the golden set came to the fore.

The ‘Big Boss’ was the main reason the Nigerian defense was impregnable as his presence was a major threat to opposition defenders.

His composition, passion and positive leadership attitude in the defense earned him a lot of praise and likeness from the Nigerian fanbase.

Keshi until his death in 2016, held the record of the first Nigerian player to play outside Nigeria when he joined Belgian club side, KSC Lokeren, in 1985.

Oliseh will forever be unforgettable for his sensational long-range strike which helped the Super Eagles claim a famous win against Spain in the 1994 World Cup in the USA.

Throughout his career, Oliseh played as essentially as a defensive midfielder; his ability to focus more on ball retention and passing rather than solely looking to win back possession was his selling point.

Oliseh played for German and Dutch club sides and was a main part of the Super Eagles Atalanta 96′ Gold winning team.

And here comes Nigeria’s all-time best playmaker who to date, hasn’t gotten a proper successor for his role in the national team.

Okocha did his thing as a footballer in a very different style so much, so he always had something new for the fans every time he played.

After debuting for Nigeria in 1993, Okocha was also a catalyst in the gold-winning dream team at the 1996 Olympics in Atlanta.

Oh! He won the golden boot at the AFCON hosted by Tunisia in 2004 after emerging as joint top scorer (with 4 goals) alongside Morocco’s Youssef Mokhtari, Mali’s Frédéric Kanouté, Cameroon’s Patrick Mboma and Tunisia’s Francileudo Santos.

Kanu not only emerged as Nigeria’s biggest hero at the Atlanta Olympics in 1996, but he also took his career to an enviable height by retiring as one of Africa’s most decorated players for club and country.

His exploit for Nigeria is a tale that will forever be remembered and narrated to younger generations.

Amuneke is one of the few stars on this list who haven’t had a perfect successor for the role in which he played for the Eagles.

He was very comfortable with the ball on his feet, capable of tricking opposition defenders to create goalscoring chances within the little spell he had with the national team.

Had injuries not blighted his illustrious career, Amuneke would’ve had more time to deliver quality football for Nigerians to see. He also retired as a one-time APOTY winner.

George was a fast-paced, extremely technical winger who also had a great sting with the Ajax side that conquered Europe in the 90s.

He too was a key part of the Super Eagles team but didn’t become a regular until he started delivering handsomely at Ajax.

His efforts down the left wing propelled Nigeria to victory in the 1994 Nations Cup.

To date, the late Rashidi Yekini has remained the best thing to happen to Nigerian football in the centre-forward position. He was so powerful, reliable and clinical in front of goal.

He became the first Nigerian to score at the World Cup, finding the back of the net against Bulgaria in 1994 – his iconic celebration after that goal still remains one of the proudest moments in World Cup history.

An incredible haul of 37 goals in 62 outings for Nigeria hasn’t been defeated by any Nigerian striker for decades after Yekini retired and his death.

Ahmed Musa: It’s pretty impossible to have twelve players play for a team in one match and Musa clearly deserves a spot in the list of Nigeria’s all-time best eleven.

He is Nigeria’s all-time topscorer at the FIFA World Cup and if anything at all, should count for something for the Sivasspor forward.