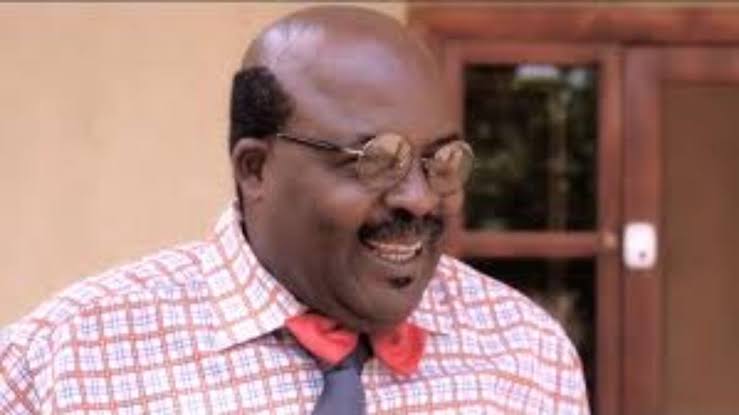 Following his death, it is now pertinent to find out Femi Ogunrombi biography. Popularly known as Papa Ajasco, he is a Nigerian comic actor who rose to fame for his performance on the Wale Adenuga’s television series.

He took over the role of Papa Ajasco, a portly wealthy man with funny mannerisms after Abiodun Ayoyinka initially played the part and then pulled out of the show.

He was famously known for playing the lead character in Wale Adenuga’s popular television series of the same name.

Beyond being an actor, Femi was also an accomplished singer, highlifist and trained nurse. It is due to this that he was fondly called ‘Uncle Ogurombo’ by many.

An award-winning film producer and professional Nurse, his biography on Instagram proudly reads: “Femi Ogunrombi is a composer, songwriter, an actor, and a Music Teacher. A music producer. A professional Nurse.”

Papa Ajasco, real name Femi Ogunrombi, was born in Ille-Ife and has ties to Abeokuta in Ogun State.

He moved to Lagos in the early 1970s to pursue a career in medical nursing. Despite training at the General Hospital Ikeja, Lagos, Ogunrombi left the profession to focus on his true passion – the arts.

During his illustrious career spanning over three decades, he has served as Music Director of Nigeria’s National Troupe and Director of Studies at Pencil Film & Television Institute.

He is married with three daughters.

Femi Ogunrombi, best known for his portrayal of Papa Ajasco on the hit Nigerian television series, passed away on Saturday, January 14th, 2023.

Popularly known by his stage name “Papa Ajasco” in popular Nigerian TV series “Wale Adenuga Production” ‘Papa Ajasco’, Ogunrombi was well-loved by many as an ethnomusicologist, music instructor with National Troupe and a trained nurse.

Affectionately named Uncle Ogurombo by his fans, the late thespian will be greatly missed.

He will be fondly remembered by many as “Uncle Ogurombo.”

The exact age of Femi Ogunrombi, or Papa Ajasco as he’s known in the entertainment world, is yet to be discovered. During a 2009 interview, he mentioned his age as being ‘over 50’ which means that today, he is most likely over 60 years old.

Papa Ajasco and Company (formerly The Ajasco Family) is a Nigerian family television sitcom created by Wale Adenuga in 1996.

The show is a spin-off of a feature film of the same title produced by Wale Adenuga in 1984, which in turn is based on the comic Ikebe Super.

The story revolves around the Ajasco family and their comedic interpretations to major societal issues.

At its prime, Papa Ajasco was widely considered to be Nigeria’s most watched comedy series, viewed weekly in twelve African countries.

Richard Abiodun Ayoyinka played Papa Ajasco for years but left the show at a point, during which Femi Ogunrombi took over.

Femi OgunrombiNollywoodPapa Ajasco
Up Next