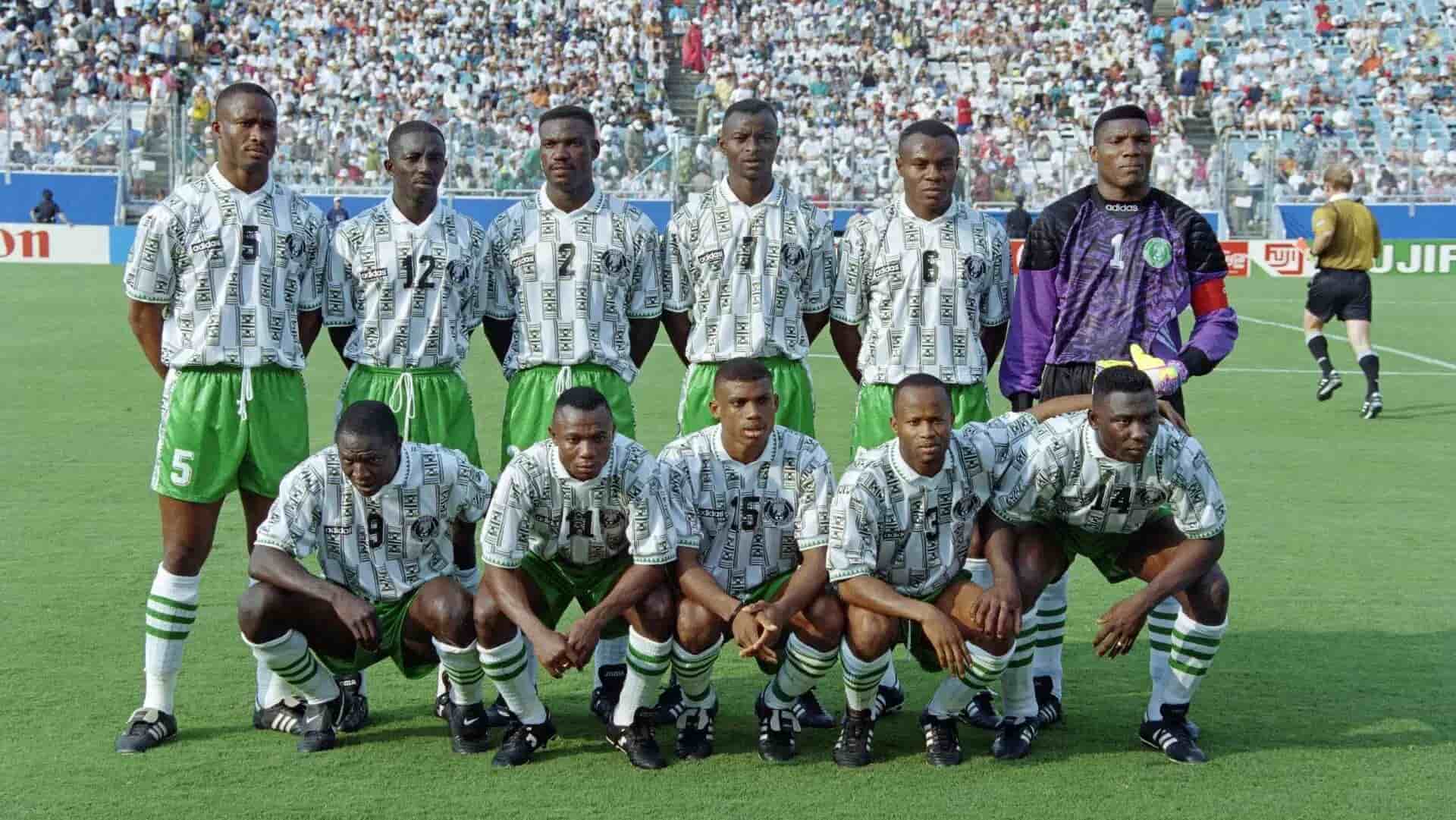 Which are the best soccer teams in Africa? Of course, Nigeria, Cameroon, Egypt, Senegal and Ghana will certainly feature in anybody’s list of the greatest teams in African football, but which country can be regarded as number one?

When it comes to African soccer teams’ rankings, the nation that can be counted as the best soccer teams in Africa will depend on what criteria are used.

In this article, we shall be using their total AFCON title Wins, performances at the World Cup, successful players abroad, number of African players of the year awards and fan base, just to avoid bias on our top African soccer teams list.

First on our list of the best African soccer teams is South Africa which played their first international game in 1992 and took part in their first AFCON in 1996 as hosts, which they went on to win. This win shot up Bafana Bafana to 16th on the FIFA rankings.

They later finished 2nd at the 1998 AFCON and also qualified for their first-ever World Cup in 1998, but unfortunately crashed out in the group stage after losing to hosts, France, and then drew against Denmark and Saudi Arabia.

South Africa also won the bronze in the 2000 AFCON, and thus, have won a medal in each of their first three nations cup appearances!

Despite the high level of performances from Nigeria, Cameroon and Senegal in the 2004 AFCON, Tunisia shocked Africa and won the trophy. But is that enough to place them in our top African soccer teams ranking?

Probably if the Super Eagles of Nigeria had not knocked out almighty Cameroon at the quarter-final stage of that AFCON, thanks to a free-kick from Jay-Jay Okocha and a goal from John Utaka, the North African country may not have been able to defeat Cameroon as they did Nigeria at the Semi-final stage and eventually win the tournament.

Tunisia has never really dominated African football, but one reason they qualify to be mentioned as one of the best African soccer teams is because of their consistency as the Carthage Eagles have appeared in 19 AFCON tournaments, including every single edition in the last decade, winning just that once in 2004.

And on five different occasions, they have been to the World Cup, making them the third-highest African team to grace the Mundial on the world stage. They, however, have never made it past the group stage.

Whenever Côte d’Ivoire is mentioned as one of the top African National football teams, it is the 2006-2014 squad that had the likes of Didier Drogba, Didier Zokora, Yaya and Kolo Toure, Emmanuel Eboue, Gervinho, Salomon Kalou, Cheick Tiote, Max Gradel, Wilfried Bony and so on.

Surprisingly though, all that that golden generation could achieve in their time was one AFCON trophy which came in their twilight in 2015, and it was without Drogba. They also had a miserable three consecutive group stage exits at the World Cup!

Their only other AFCON title came way back in 1990.

FIFA rated them highly in 2013 as the 12th best team on the world rankings.

Yaya Toure was named the African footballer of the year four times consecutively, while Drogba won the best footballer in Africa twice (2006 and 2009).

Morocco won their first AFCON title in 1976 (it’s their only still anyway), becoming the first African team to top a World Cup group in 1986 and the first to reach the round of 16 in the process. They were knocked out 1-0 by West Germany.

The Atlas Lions also ranked number 10 in the world in 1998, making them one of just three African teams to ever enter the top 10 of the FIFA rankings, the other two are Nigeria and Egypt.

With a new generation of superstars scattered around the biggest clubs in Europe, the Desert Foxes have won two AFCON titles.

They won the first as hosts in 1990 and the second in 2019 on Egyptian soil, making them the one but last kings of Africa.

Algeria qualified four times for the World Cup, even beating defending champions West Germany in their debut in 1982.

Controversially, Algeria left the world’s biggest tournament in the group stages after a blatant bout of match-fixing by West Germany and Austria.

It was the same fate that befell them in the 1986 World Cup, only this time there was no controversy. It took them 24 years to qualify for another World Cup in 2010. They again crashed out in the group stages, this time unable to register a single goal.

Algeria got as far as the round of 16 at the 2014 World Cup before being knocked out by eventual champions, Germany, in extra time.

The likes of Riyad Mahrez, Sofiane Feghouli, Islam Slimani, and Yacine Brahimi, were part of that squad that saw Algeria climb up to 15th in the FIFA rankings.

Teranga Lions had some memorable squads like the 2002 squad led by the likes of Aliou Cisse, El Hadj Diouf, and Kalilou Fadiga. They appeared at the AFCON final for the first time in their history but lost in penalty shootouts to Cameroon.

They went on to make their World Cup debut a few months later and impressively defeated France in their opening game. Senegal became only the 2nd African team in history to reach the World Cup quarter-finals before being knocked out by Turkey.

It was until the late 2010s that Senegal got another set of a new generation of superstars such as Sadio Mane, Kalidou Koulibaly, Idrissa Gueye, Keita Balde, Chekou Kouyate, and Ismaila Sarr.

These stars their nation to a quarter-final exit in the 2017 AFCON before qualifying for the 2018 World Cup in Russia where they were controversially knocked out of the group stage.

And at the AFCON final in 2019, they suffered a heartbreaking loss to Algeria.

But Sadio Mane, who is currently in the form of his life, staged a comeback in the 2022 AFCON and won the silverware finally for Senegal, the reigning African champion.

The Black Stars of Ghana were one spot-kick away from beating Uruguay and becoming the first African team to reach the World Cup semi-finals in 2010, but Asamoah Gyan changed the course of that history.

Ghana remain one of the most successful teams in African football history, having won the Nations Cup four times.

Their FIFA rankings got to its highest in 2008 with 14th place after their impressive feat of winning every qualifying match en route to participation in the South Africa 2010 World Cup.

Aside from him, there were other great players who have represented Ghana such as Michael Essien, Sulley Muntari, John Mensah, Kwadwo Asamoah, Kevin Prince Boateng Andre, and Jordan Ayew.

Nigeria’s Super Eagles are probably the most popular national team in Africa, boasting of some of the best players on the continent.

The Super Eagles of Nigeria are also the most balanced national team on this list of best African soccer teams in terms of performances on the continent and the world stage.

“Giants of Africa”, as they are often referred to, have appeared in six World Cups since they made their debut in USA 94′, with Germany 2006 and the forthcoming Qatar 2022 being the exceptions.

When it comes to the most World Cup games won among African teams, Nigeria comes first with 6 wins. They’ve also scored the most goals by an African team in World Cup history with 23 goals in total.

And on the African scene, Nigeria again holds the record of being the most decorated team in AFCON history, with three titles, four silver medals, and eight bronze medals.

What this means is that the Super Eagles have finished in the top three in 15 of their 18 AFCON appearances.

Even though the 1994 squad that won the Nations Cup in Tunisia were knocked out of the World Cup round of 16 by Italy, they got a number 5 FIFA rankings, the highest by any African team to date.

Nigeria has always had the luxury of being represented by incredible players who plied their trade for some of the biggest clubs in the world, Kanu Nwankwo, Emmanuel Amunike, Rashidi Yekini, Daniel Amokachi, and Victor Ikpeba are the ones that have been named the best footballers in Africa with Kanu winning the award twice (1996 and 1999).

The Indomitable Lions are one of the best soccer teams in Africa and hold the record for the most World Cup qualifications among African teams with seven appearances on the big stage.

Cameroon are also the first African team to reach the World Cup quarter-finals in Italia 90′, before being knocked out in extra time by England.

At the continental stage, they have won the African Cup of Nations five times and ranked 11th on the FIFA rankings on two different occasions, in 2006 and 2009.

Cameroon boast the likes of Samuel Eto’o, who at his peak was one of the best strikers in the world, Rigobert and Alex Song, Geremi Njitap, Lauren, Patrick Mboma, and the legendary Roger Milla.

They remain the only country to have its players named more times as African footballers of the year, winning the award 11 times, with Eto’o claiming four of them.

The almighty Pharaohs of Egypt deservedly are not just one of the best soccer teams in Africa, but the best.

Egypt currently holds the record for most AFCON titles, winning the competition 7 times, and a back-to-back from 2006 to 2010.

The Pharaohs have played in 23 of the 33 AFCON editions, and have a solid 56.8% win percentage of the 95 matches played at the tournament.

Mohammed Aboutrika, Mo Salah, Essam El Hadary, Mido, Amr Zaki, Mohammed Zidan, and Hossam Hassan are just some of the many big names to have worn the famous red, black and white of the Egyptian national team.

Unfortunately, however, the Pharaohs have not been able to replicate their continental dominance on the world stage. The North African side has only managed three World Cup appearances in their history, making it out of their group just once, in 1934.

Although FIFA ranked them 9th in 2010, their record on the world stage is still poor.

CAF, on the other hand, has bestowed the African footballer of the year award to Mohammed Salah only, winning it back to back in 2017 and 2018.

This article was most recently revised and updated on 1 week