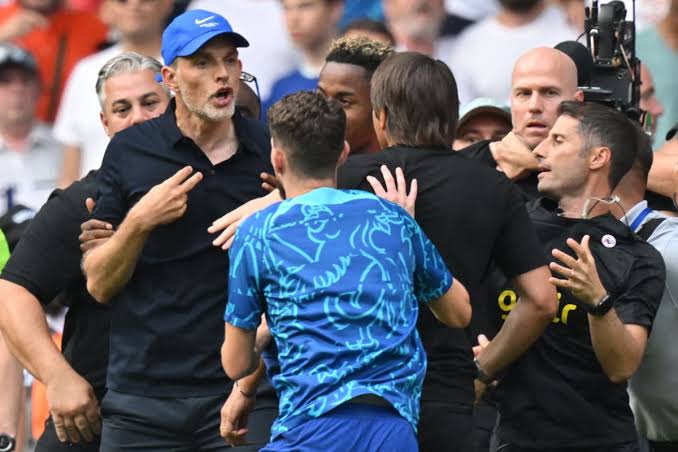 Thomas Tuchel will serve his one-game touchline ban for his bust-up with Antonio Conte against Leicester on Saturday but insists the Tottenham boss should face the same punishment.

The FA confirmed Tuchel’s sanction will stand after it was temporarily suspended as Chelsea awaited the written reasons from the Independent Regulatory Commission.

Tuchel challenged the panel’s decision after assessing the explanation, claiming it was ‘excessive in all circumstances’ but that was rejected by an FA Appeal Board who upheld the commission’s decision.

The two managers clashed following Chelsea’s 2-2 draw with Spurs and were both sent off by referee Anthony Taylor though the panel deemed Tuchel the aggressor and received a harsher punishment than Conte accordingly.

Along with the ban Tuchel also received the bigger fine – £35,000 compared to Conte’s £15,000 – and he said: ‘My understanding was that we both had our impact in this situation and both got sent off. I can understand that I get a ban, I get a fine.

‘What I don’t understand is that the other coach does not get the same punishment. It’s hard to understand.

Tuchel will take his seat in the stands just above the dugouts but still be able to address his players before and during the game in the dressing room.