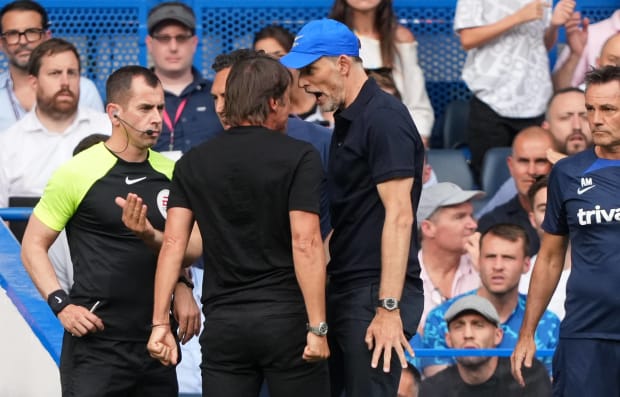 Antonio Conte is very much about to get just what he wants … but all that will largely depend on Chelsea boss Thomas Tuchel.

Both managers recently has a touch line quarrel and we’re fined by the FA.

However, this time is not going to be touchline fighting, instead Conte could finally be close to finding the right-sided attacker he has been seeking all summer with players desperate to come to White Hart Lane.

Working with chairman Daniel Levy and managing director of football Fabio Paratici, the holes in the Tottenham squad have been targeted one-by-one and realistically all that is needed before the window shuts is a centre-back and one more attacking option.

That latter weakness has seen a long list of names linked with the club, most recently Anthony Gordon, who is being hotly pursued by Chelsea.

But if Thomas Tuchel does land his man, it may also play right into Antonio Conte’s hands.

He has been linked with a return to Ajax this summer, but would rather stick with his mission in England with the opportunity of a fresh start.

The Morocco international who built his reputation in the Dutch league feels he has not really done himself credit so far in the Premier League.

Algemeen Dagblad, based in Holland, reported Tottenham’s interest in the left-footed right-winger as competition for Dejan Kulusevski.

Now Johan Derksen, a veteran journalist who played in the Eredivisie in the 1970s when Dutch football was in its pomp, has explained why his ideal future remains in London.

“Ziyech was the big star in the Netherlands,” he told Today Inside. “I can imagine that he would prefer Tottenham, because he still wants to succeed in England.”

List of PSG players and their salary in 2022? Mbappe, Messi wages shocking