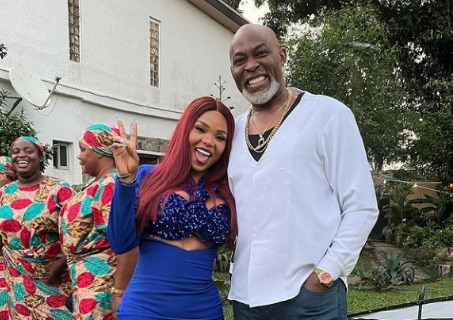 Nollywood actress Iyabo Ojo has shared a wild fascination for Richard Mofe Damijo given how she reacted after linking up with the legendary actor for a movie project.

Being an actor sometimes gives that feeling of wanting to work with certain people, as it could be some sort of wish.

Probably due to holding a particular actor in high esteem, and then holding the desire to be on the same set with them on a movie project will bring that feeling of a great accomplishment, hence it wasn’t surprising seeing how a veteran figure such as Iyabo herself was thrilled linking up with RMD for a project.

Iyabo Ojo in her post shared a message that reads ” finally get to be on set with the king himself.”

There is no denying the look of happiness displayed on Iyabo’s face, as she must be holding some great feelings of harmony within her which is absolutely understandable.

‘Half Of A Yellow Sun’ Director Biyi Bandele Dies @ 54

Black Panther 2 soundtrack has Tems on it!