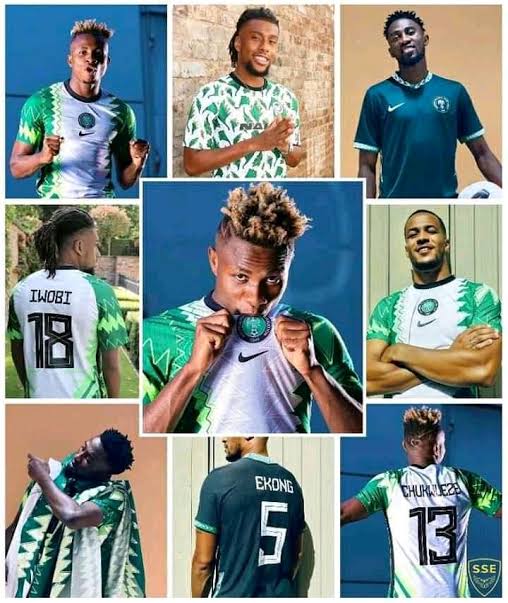 The 2022 FIFA World Cup in Qatar is just few months away and countries have been releasing their jerseys for the World Cup.

The Super Eagles of Nigeria may not have qualified for the World Cup but they have revealed their new stripes irrespective.

It’s the designs they would have been wearing if they qualified for the tournament and once again just like they done in previous times, the kit makers have managed to make the Nigerian national team look classy.

After the 2018 Nigerian kit made the whole world go gaga, Nike has managed to keep the ante up and in respect to the newly released kit, NaijNaira rank the previous six kits Nigeria wore at the World Cup.

Nigeria’s debut at the FIFA World Cup was marked with a beautiful kit by addidas albeit it must be me admitted that the 1994 showpiece had some massive retro kits.

Nevertheless, Nigeria’s white kit with black details in form of boxes allover stood out and still do in another era, the away kit has a collar and the design serves as the inspiration for the 2022 white away kit.

Nike’s rendition of the Super Eagles kit in 1998 featured a bold green all through with wide white trim on the shoulder and down to the side.

The jersey has a black details on the sides of the white that runs on the shoulder and side. Not as beautiful as the 1994 away kit but it stays classic and loved more or less like the original Nigerian football jersey and color.

After making a true Nigerian jersey in 1998, Nike dropped the quality with one of the strangest Nigerian kits and most likely one of the most hated (which is partly due to the abysmal world cup showing and partly the boring design).

The green was very light and with a white slant on each side. The away jersey was in same design but in white, both easily ugliest Nigerian jersey ever made.

Nigeria missed the 2006 FIFA World Cup in Germany and by such, 8 years had gone, technology had vastly improved and football jerseys were much more advanced than they used to be.

In 2010, Addidas provided a decent jersey for Nigeria, a classic football kit but with a dull green and white details. A boring design compared to 1998 which is it’s closest comparison.

The away jersey is just same design but in white and the stripes in green, easy job.

2014 Nigerian jersey by Addidas took inspiration from the 2002 colour pallette by Nike only that the three stripes and modern look made it a bearable choice.

Still, it was a strange design to a lot of followers of Nigerian football who were not sure if that jersey was Nigeria’s. If 2002 had 3/10, this takes 5/10.

The away kit was even more questionable with the same design but white base and green detailed shirt, numbered with red colour, one of the strangest colour combos on a Nigerian shirt.

Nigerians couldn’t believe their eyes when they saw Nike’s design for the Super Eagles 2018 World Cup appearance in Russia.

A design that blew the whole footballing world away, foreign players hopped on, even won a supposed Jersey World Cup trophy, but what made this kit ticks?

Apparently it was a nod to the 1994 shirt and also black complements lemon green well, it’s a base white with winged-shaped green stripes allover the torso and a black coloured winged-shaped stripes across the shoulder.

The green Is closer to the 2014 and 2002 greens but what stood it out was the black detail and the wing stripes (or inverted Vs).

Unlike previous designs where the away kits are usually same design as home but with inverted colours, Nike took time to design a shiny deep green kit for a stylish set of World cup Jerseys for Nigeria. Best set of Nigerian jerseys anytime, anyday.

There are other Nigerian kits that are better than the ones on these list but they didn’t feature at the world cup and these notable mentions include the 2021 AFCON kit with Green white green base and black details in addition to the green-gray away shirt.

Another is the one-time friendly kit Nigeria wore against Argentina in a 4-2 victory for a match played in Russia ahead of the 2018 World Cup.

The 2015 kit with the large white stripe detailed to the right and another round the left sleeve deserves a mention as well as the 2016 Olympics shirt.