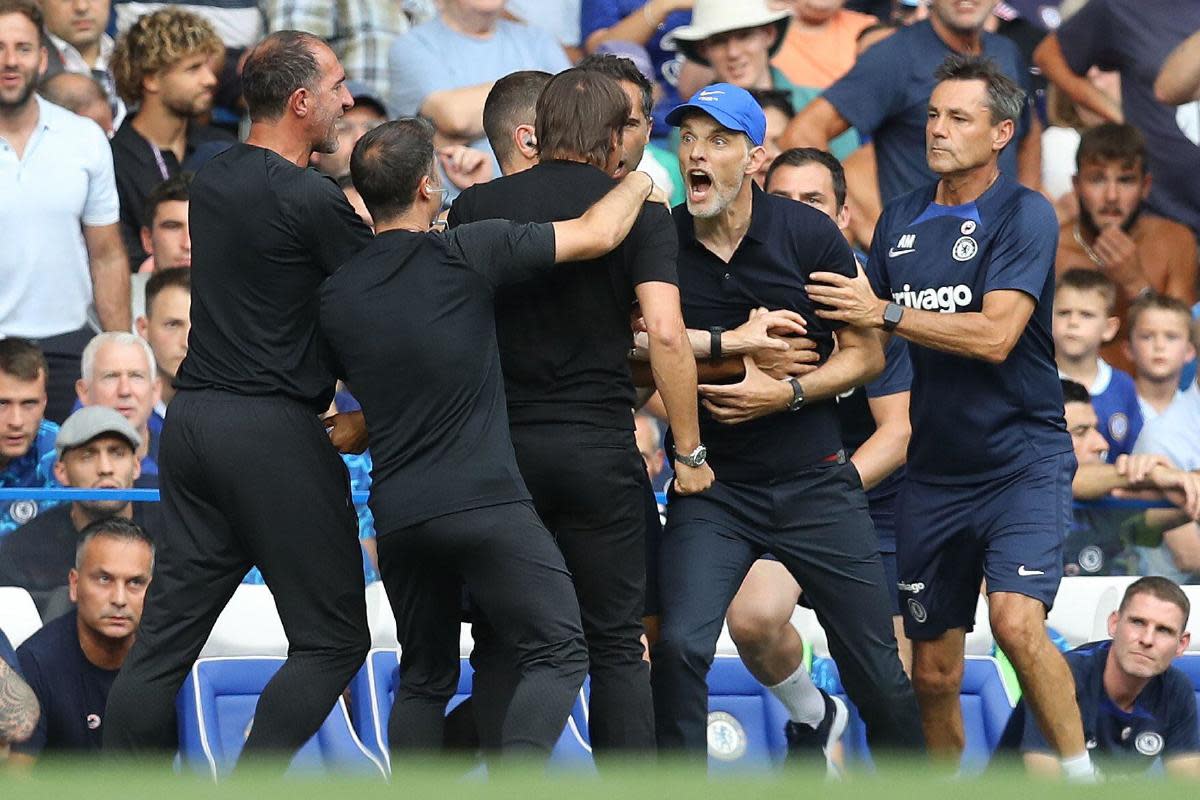 Chelsea boss Thomas Tuchel and Tottenham manager Antonio Conte twice clashed, first on the touchline, then on the field at the final whistle, in what was a highly-charged London derby at Stamford Bridge on Sunday.

Chelsea had taken the lead, but a controversial equaliser from Spurs’ Piere-Emile Hojbjerg led to tensions and tempers spilling over.

Former Chelsea manager Conte raced in – and the pair briefly touched heads, as members from both benches piled into a messy melee.

Tuchel, his assistant Zsolt Low, and Conte were all booked, but after all the fuss, the goal was awarded.

Then, after Reece James put Chelsea back in front in the 77th minute, Tuchel set off on a sprint past Conte and down the touchline, clenching his fist in delight.

But it didn’t end there.

At the final whistle – after the strained game ended in a 2-2 draw thanks to a Harry Kane extra-time goal for Spurs – the managers met on the field for the customary handshake… and another tussle ensued, resulting in a second booking and a red card for both.

“I thought when we shake hands you looked in each other eyes, but Antonio had a different opinion,” Tuchel said of the post-match clash with Conte.

“He was happy when they equalised, and it got a bit heated, but nothing big… I think it was not necessary, but a lot of things were not necessary.

“It was something of nothing. I have no ill feeling,” he told Sky News Radio.

Conte put the emotions down to passion.

“It can happen when the passion is high on both sides.”

He said he would “pay more attention” next time when he shakes hands with his German counterpart.

“I’ll stay on my bench, he’ll stay on his bench. No problem about this,” he added.

Spurs striker and England star Harry Kane described the encounter as “spicy” on his Twitter feed.

The managers are both now facing one-match touchline bans.

La Liga: Almeria Vs Real Madrid – Confirmed Lineups Are Out