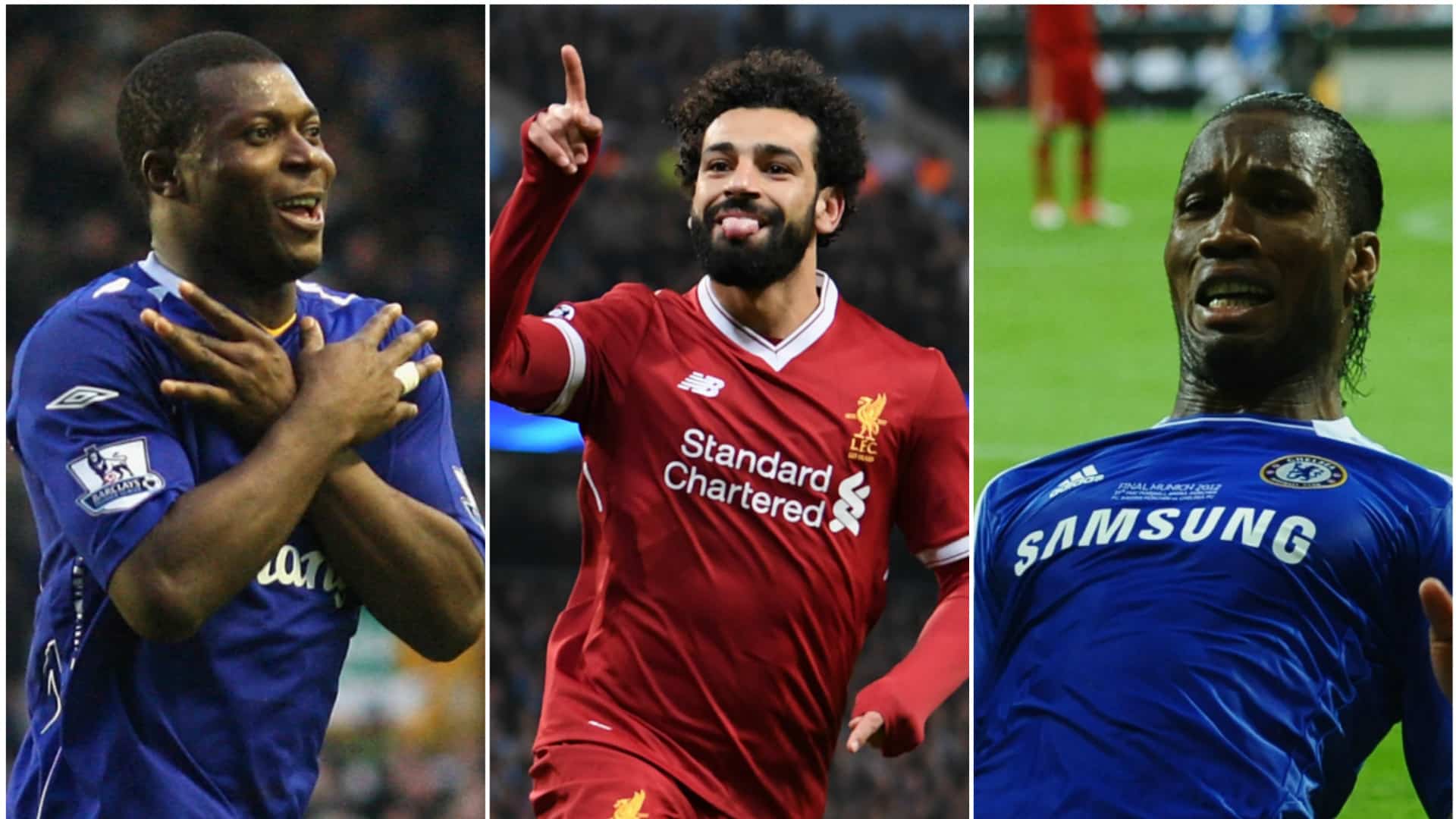 The Premier League is the dream of every footballer in the nook and cranny of the earth. Countless players have plied their trade in the English top-flight.

There have been some elegant players like Nigerian midfielder Jay Jay Okocha, Chelsea legend, John Mikel Obi and many others but here are the ten highest scoring Africans in the Premier League.

Egyptian forward Mohammed Salah is one of the four other players on the top 10 Africa highest scoring players in the PL that is still active.

Salah has featured for two teams, Chelsea and now Liverpool. Salah has scored a whooping of 120 and more as far as the 2022/23 season goes.

He has the most goals in a season with 32 scored for Liverpool in 2017–18 and has managed to hit 19 or more every single season at Anfield.

The Senegalese striker joined the Saints from RB Salzburg in 2014 with 21 goals in 67 games. He also added 91 goals in six years at Liverpool with his best being in the 2018/2019 season with 22 Goals.

The legendary Ivorian striker only played for Chelsea over two stints scoring 104 goals in total.

After leaving for China, he returned to Stamford Bridge in 2014 for a final dance and managed to score 4 in 28 matches.

Well, Emmanuel Adebayor was one of Africa’s potent names in front of goal when he was active.

He played for three different teams including Arsenal, Manchester City and Tottenham for a combined 97 goals.

It will take some scoring for Riyadh Mahrez or even Pierre Emerick Aubameyang to equal the 95 goals he scored.

Aiyegbeni played for a handful of Premier League clubs but the most prominent ones include Everton Portsmouth, Middlesbrough, Blackburn and Reading.

Mahrez made his Premier League entrance with relatively obscure Leicester City when they made that historic title win in 2016.

He scored 17 goals in 37 games in their title-winning campaign and added 18 more in the next two seasons.

He moved to Manchester City in the 2018 and 2019 seasons and has scored 38 times in the Premier League.

Gabonese forward Pierre Emerick Aubameyang took his goalscoring boots to Arsenal and had a fantastic run of 128 games and 68 goals for the Gunners.

He moved to Barcelona and returned to Chelsea this summer and looks poised to add more to his Premier League tally.

Well, what a Premier League career Yaya Touré had at the Etihad Stadium when he joined Manchester City from Barcelona.

The Ivorian midfielder turned out to be a very important source of goals for the  Citizens as they went ahead to gobble up Premier League titles.

He played for City for 8 years from 2010 making over 200 appearances. He is the highest-scoring African midfielder in the PL.

Crystal Palace forward Wilfried Zaha started his Premier League career as an English man but after his international allegiance changed from England to Ivory Coast, he legally enters this list with 61 goals scored across two club sides including Manchester United and Crystal Palace.

Zaha has played for Palace on three different stints with 61 Premier League goals to show for it, the majority coming in his third stint which started in 2015 with an accumulation of over 200 games.

Papilo joined Arsenal from Inter Milan after a heart problem similar to that of Christian Eriksen which forced the Dane to leave Inter Milan.

However, Kanu isn’t a legend only at Arsenal, the lanky forward had stints at Portsmouth and West Brom with a total of 54 goals to his name.