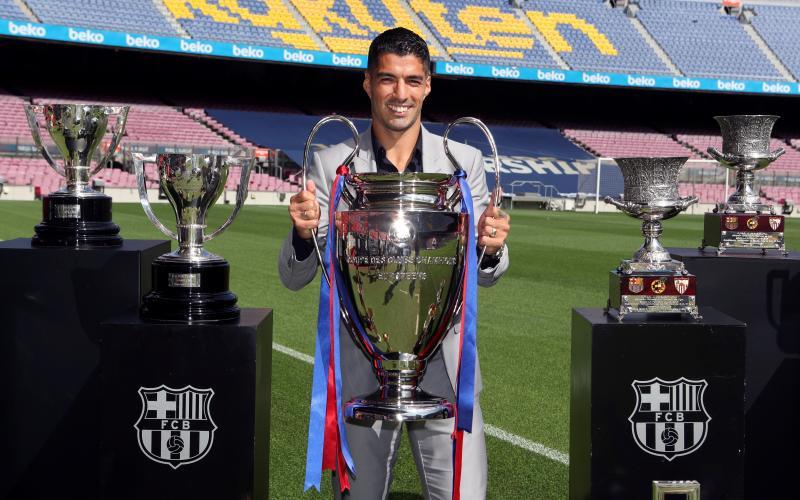 How many trophies has Luis Suarez won? El Pistolero (‘The Gunman’), as he is fondly called, is one of the best players and one of the greatest strikers of all time.

The Uruguayan has won 20 trophies in his career which includes the Eredivisie at Ajax, the League Cup at Liverpool and La Liga, and the Champions League at Barcelona.

Let’s now see how many La Liga trophies Suarez has won with Barcelona, Atlético Madrid, as well as when he was at Liverpool.

Suárez is currently in his second spell at the club and has played for them before in the 2005-06 season.

Breakdown of Suárez’s trophies at Nacional:

He scored eight goals in the 2009-10 KNVB Cup (including two in the final) to help his side win the title after defeating Feyenoord 6-1 on aggregate in the final.

The Uruguayan was eligible to own an Eredivisie title medal the following season despite his departure from the club in the January transfer window.

Breakdown of Suárez’s trophies at Ajax:

Suárez joined Liverpool in January 2011 and played there for four years till 2014.

He won the EFL Cup in his first full season at the club after defeating Cardiff City 3-2 on penalties in the final.

Suárez also reached the FA Cup final that year only to lose 2-1 to Chelsea.

Breakdown of Suárez’s trophy at Liverpool:

He has won the Supercopa de España twice with the club in 2016 (after defeating Sevilla 5-0 o aggregate) and 2018 (after beating Sevilla 2-1 in the match).

Luis tasted success in Europe once in the 2014 -15 season when he scored seven goals in the UEFA Champions League (including one in the final) to help his team win the trophy after defeating Juventus 3-1 in the final.

Suárez won the UEFA Super Cup once with the club in 2015 after his side defeated Sevilla 5-4 AET in the match.

He scored five goals in the 2015 FIFA Club World Cup (including two in the 3-0 win over River Plate in the final) to help his side win the title.

Breakdown of Suárez’s trophies at Barcelona:

Suárez was a player for Atlético Madrid from 2020 to 2022. He scored 21 La Liga goals in his first season at the club including the winning goal on the final day to help his side clinch the title.

Suárez has been a player for the Uruguayan national team since 2007.

He scored four goals in the 2011 Copa América (including one in the 3-0 win over Paraguay in the final) to help his side clinch the title.

Breakdown of Suárez’s trophy with Uruguay:

Methods of Deposit And Withdrawal on 1xbet Nigeria