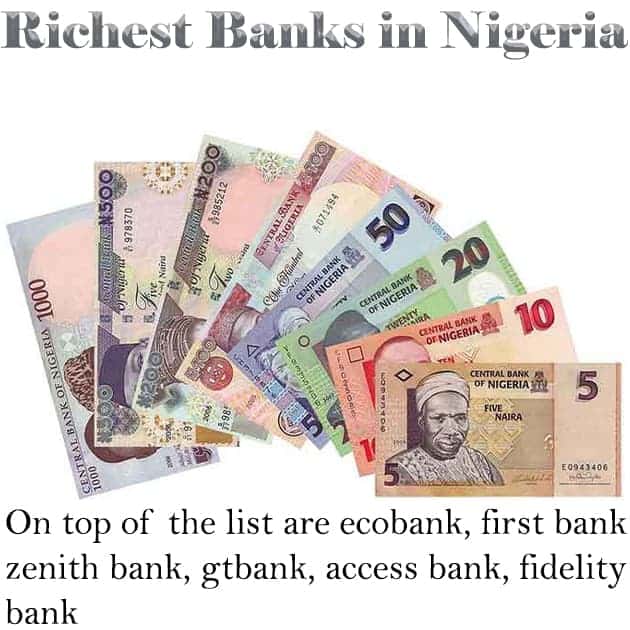 There are over 20 banks fully licensed by the Central Bank of Nigeria to operate within the country. This includes commercial, merchant and non-interest banks. Leading to serious competition among the financial institutions. So which of them are the richest banks in Nigeria? You may ask.

I will tell you. Right here in this write up based on latest data released by the financial institutions themselves.

Based on the 2021 Q3 results, the banks listed in this article are the richest financial institutions in Nigeria presently.

This list was compiled based on the total assets of each of these banks according to their ending of September 2022 earning reports published by the banks themselves and other relevant financial media outlets. Find out if your favourite bank made it to this list.

Based on the bank’s total assets in their Q3 2022 reports which was released in November. Ecobank is officially the current richest bank in Nigeria.

The Pan-African bank is a commercial bank in Nigeria licensed to operate in the country by CBN, Nigeria’s banking regulator. Though the bank was founded in 1989 and has been in operations since then, it was not until it acquired Oceanic Bank in 2011 that it became very popular among Nigerians.

Ecobank is presently among the leading financial institutions across the African continent. They presently have over 1000 branches and 10,000 workers in more than 32 countries all over the continent.

Zenith Bank Plc is among the commercial banks duly licensed by the Central Bank of Nigeria to operate in the country. Founded in May 1990 by Jim Ovia, the bank spread across Africa, delivering quality financial services everywhere.

Among the subsidiaries of the bank are Zenith Pension Custodian, Cyberspace Networks, Zenith Bank Ghana, Zenith Bank United kingdom etc. In Nigeria today, the bank has over 500 branches scattered across the country.

Also, among their numerous products are Eazy banking which comprises of their mobile app and ussd banking, person and corporate accounts etc.

The bank is widely regarded as one of the best financial institutions in the country.

Based on the Q3 2022 reports the bank’s total assets is almost N8 Trillion, making it the second richest Nigerian bank presently.

Formerly known as intercontinental institutions. Following their merger with Diamond Bank plc, the group has become the largest finance services provider within the country.

The bank has business offices in the United Kingdom and in our 8 Sub-Saharan countries which include:

The Gambia, Rwanda, Sierra Leone and Zambia. The bank currently has over 9000 workers across its hundreds of business offices and touch points.

From that increase, we know that Access bank has completely sealed its position in this list for the rest of the year. They can only go higher than that. Especially following this recent merger with Diamond Bank.

First Bank of Nigeria may be the oldest bank in the country but it is still very much competing with the new-generation banks in terms of delivering quality financial services to the Nigerian people.

The bank, founded in 1894, has till today maintained its status as one of the largest banks in Nigeria. With over 700 branches and 10 million customers, First Bank is a real force to reckon with in the banking industry.

The bank has active branches in UK, United Arab Emirates, South Africa, China and several other places outside Nigeria.

Among the bank’s innovative products and services are USSD banking, Online banking and so many others.

In Q3 2022, the total assets of First Bank of Nigeria rose to N7.2 Trillion, making them the 4th richest in the country presently.

United Bank for Africa (UBA) is one of the most popular banks in Nigeria. The bank has business offices in New York, London, Paris and over 20 countries in Africa.

With over fourteen million customers and 1000 branches across Africa, the bank is committed to reaching every African with quality financial services.

United Bank for Africa was founded in 1949. Since it was set up, the bank has continued to lead the way in terms of innovative banking services: among the ban product and services are: Mobile banking, Internet banking, Wholesale banking, corporate banking, consumer banking, investment banking etc.

UBA has won so many awards, at the national level and also internationally. According to the published report of their Q3 2022 performance, the bank earned quite a lot of profit this year.

Based on that report, their total assets rose to over N7 trillion. Which is the 5th highest in the country for this year, putting them in the position they occupy on this list.

Guaranty Trust Bank has in recent years gained quite a lot of popularity among several Nigerians. Simply known as GTBank or GTB, the bank ranks among the top banks in the country.

Due to their quality financial services and highly innovative products, many people regard them as the best bank in Nigeria.

In a recent event held in July 2019 (Euromoney Awards for Excellence) in London, Guaranty Trust Bank emerged as the “Best Bank In Africa”. They were also awarded the “Best Bank in Nigeria” for the 9th time, setting a record.

Unlike several banks in this list, GTBank lets its actions speak for them. In 2011 they were ranked the biggest bank in Nigeria based on market capitalization, according to a report by Thisdaylive.

The bank has continued to wax stronger and stronger that it now competes with others that were here long before it came into existence.

According to the published report of the bank earnings in Q3 2020, GTBank’s total assets are now N4.6 Trillion up from N3.598 trillion. That makes them sixth on this list.

Stanbic bank doesn’t make a lot of noise like several others, but their actions speak very loud for them.

The bank is among the banks considered by many Nigerians as the “billionaires’ bank”, just like GTB.

The bank began operations in Nigeria in 1989 and has since then continued to be among the top banks in Nigeria.

Fidelity Bank is one of the best commercial banks in Nigeria at the moment. Founded in 1988, the bank has gained quite a reputation for “keeping their word” in terms of delivering quality banking services.

The ban today serves over 4 million customers across the nation and beyond. They currently have over 240 business points, 775 ATMs and more than 4346 POSs.

According to the vision of the bank, they are aiming to be at the top of the biggest and best financial institutions in the country soon.

Union Bank of Nigeria is one of the country’s oldest and most reliable bans. They have been in operation in Nigeria since 1917.

The bank has its headquarters in Lagos with many of its branches scattered across the country. They also own a subsidiary, Union Bank UK, located in London, United Kingdom.

First City Monument Bank or FCMB as it is simply known, is among Nigeria’s most popular and richest banks. The bank started operations in Nigeria in 1982. It has since then grown to compete with others that were here before it.

One thing that stands out about FCMB is their customer relationship and excellent financial services. The bank has its headquarters in Lagos and has branches all over Nigeria.

Summary of Richest banks in Nigeria

These are the top 10 richest banks in Nigeria based on their respective 3rd quarter of 2020 reports of total assets.

When you want to talk about the wealthiest financial institutions in the country, these are the ones you should be talking about.

Wema and Unity would have made the 11th and 12th position on our list if we aren’t just writing about the top ten.

Which of these Nigerian banks is your favourite? Do you think the ones listed here deserve their position? I’ll love to hear your opinion. Let me know in the comment section below.

Best Banks In Nigeria {What you Should Look for}

This article was most recently revised and updated on 1 week