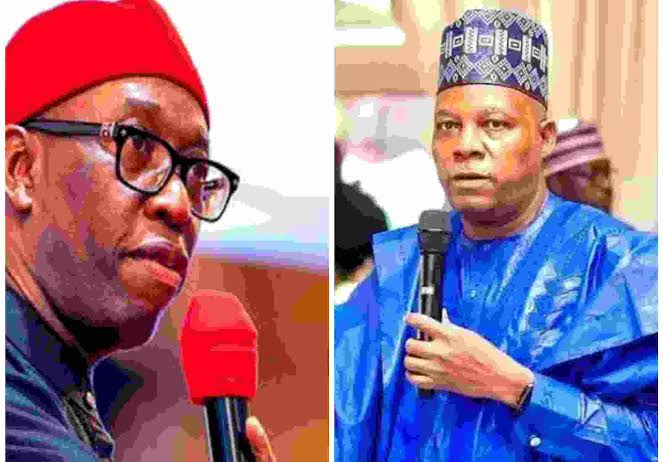 Ifeanyi Okowa has criticised the All Progressives Congress APC, Vice presidential candidate, Kashim Shettima over comments that he will oversee the nation’s security if elected.

The Delta State Governor has now demanded an explanation for the comments asking if Shettima planned to take over the job of the Commander In Chief.

Speaking in Kano, Okowa said, Kashim Shettima ’s statement is too ambiguous and should be verified so that Nigerians will know if he will steer the ship of security council meetings and takes over the role of the president.

He said, “in our own case we are going to run an all-inclusive government, with me and other officials complementing the President, not that I will oversee this or that, ours is an all-inclusive administration”.

The PDP vice presidential candidate asked the APC VP candidate if he is revising the constitutional provisions of the Commander In Chief as it is in Nigeria and if not, “how can he control security while the President is supposed to be the one in charge of them”.

Speaking on other national issues, Okowa expressed worry over the shortfall in the nation’s oil production, insisting that something drastic has to be done to arrest the situation.

He said as a government if elected, they will implement the New PIB Law, and involve fully the communities in the guarding of pipelines with huge penalties against anybody found vandalizing them.

Okowa said, “above all, Nigerian security operatives should be sincere in protecting the nation’s assets, because without their commitments and sincerity whatever the government provides will be neglected”.

“All those communities operating illegal refineries are known, including those outsiders, therefore security agencies should act on them and be sincere in taking care of the situation.

List of movies and TV shows Leaving Netflix in September 2022